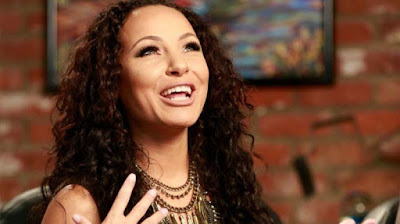 Just months after she struck a plea deal to avoid time behind bars, the fiancee of Marion "Suge" Knight was sentenced to three years in jail Friday for a probation violation linked to the former rap mogul's pending murder trial.

Prosecutors last year accused Kelly of selling surveillance footage connected to Knight's murder trial to the gossip website TMZ for $55,000. A judge had previously ordered that the recording not be shared with the media.

In October, Kelly pleaded no contest to conspiring to violate a court order. She was ordered to pay $55,000 in restitution, perform 100 hours of community service and serve five years on probation.

On Friday, Kelly broke down in tears while reading a letter to the court, calling her arrests in relation to Knight's case a "humbling" and "humiliating" experience. She pleaded with Sortino to think about her 8-year-old son, who will be without both parents if she and Knight remain incarcerated. Kelly also said her father died of cancer shortly before she was arrested on the probation violation in December.

The sentencing is the latest blow to Knight's inner circle. Last week, two attorneys who have represented Knight at various stages of his criminal proceedings were arrested, but then suddenly released.

The latest case against Kelly began in October after investigators with the Los Angeles County Sheriff's Department learned Knight had been communicating with two journalists from jail.


Knight is barred from making jailhouse calls to anyone but his attorneys under a 2016 court order, but he was using other inmates' phone codes to place the calls, according to testimony Friday by sheriff's Sgt. Richard Biddle.

Text messages presented in court showed Kelly had been placing money in those inmates' jail accounts, and prosecutors argued the money was provided to help Knight make the phone calls. Prosecutors also showed emails between Kelly and one of the filmmakers in which Kelly advised them on how to contact Knight.

Sortino also ruled that text messages between Kelly and Tony Moore, a private investigator who has been aiding Knight's defense, were meant to relay information between Kelly and Knight. She was barred from speaking to Knight as part of the plea agreement reached last year.

Moore, who was seated in the back of the courtroom, was evicted from the hearing for using his cellphone in court.

Kelly's attorney, James Drake, argued that the prosecution was trying to punish Kelly for Knight's alleged crimes. He said she did not understand the various court orders limiting Knight's contact.

But Sortino scoffed at that notion.

Knight has been jailed since January 2015, after he rammed his Ford F-150 Raptor into two men in the parking lot of Tam's Burgers in Compton following a dispute on the set of the N.W.A biopic "Straight Outta Compton." Terry Carter, 55, was killed. Cle "Bone" Sloan, 52, survived.


Knight and his attorneys have argued he was acting in self-defense because the victims had attacked him and were carrying guns, but prosecutors say there is no evidence to support that claim.

His trial is scheduled for April.